A Beginner's Guide To Pokemon Voyage 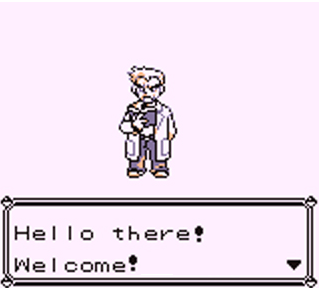 Pokemon Voyage was launched by Kakashi on January 8th, 2012. There are a lot of things you can do on the RPG! You can train your Pokemon, catch new Pokemon on our many maps, obtain Promos, buy other trainer's Pokemon and sell your own, trade, and more! These features, along with others, are discussed in detail in the RPG section of the Wiki.

After you've created your account, dive right in to the wonderful world of Pokemon Voyage! Below is a guide to how to be a successful member of Pokemon Voyage. *Notice* This guide is not what you have to do, just what certain members, who have been around since the inception of the RPG, believe to be the best ways to make a name for yourself on Pokemon Voyage.

PLEASE read the Rules and Regulations (Click here to read them). Countless people have been banned even though they had no intention of cheating, because they refused to read the rules, and thus broke rules that they didn't know existed. So it is strongly encouraged that you read the Rules and Regulations before you start exploring! You wouldn't want to get into this game, and then have everything you've worked for taken away would you? The Admins and Mods are very understanding, there are warnings, but continued abuse of the rules will get you banned! No matter how rich you are, no matter if you've been staff before, nor how many friends you have, there are no exceptions. You have been warned... 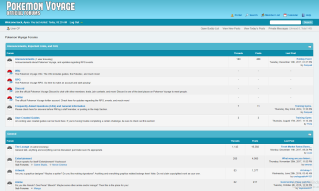 The first thing that you should do, if you'd like to participate with the Pokemon Voyage community, is make an account on the Pokemon Voyage Forums. The forums are where you can trade with other members, participate in the community, join guilds, learn about special events, have your questions answered, win contests, and more! So what are you waiting for? Sign up! For more details on the forums, visit the Forums category of the Wiki. 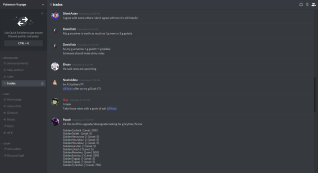 Next, you should make an account on the PokemonVoyageDiscord. The Discord invite can be found on the RPG, next to "Forums" in the top toolbar. It only takes a few seconds to connect to the official Pokemon Voyage Discord, and it is a great way to meet and trade with other members! Contests also take place on Discord. Don't ever be afraid to come join us to chat, trade, or ask questions about the game. Many experienced members and staff are lurking on the Discord, so use them to your advantage! 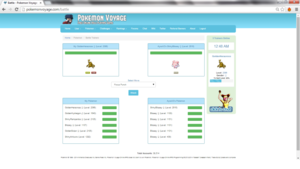 Training is one of the most important aspects of the RPG. When you train, your Pokemon level up, and you earn money. You can do a lot by training: Earn (and spend) money, train other player's Pokemon for a price, aim for the strongest Pokemon, trade Pokemon at high levels, challenge Pokemon Gyms, and more! To learn how to train your Pokemon, see Training.

A word of advice. Training is the easiest way to gain profit on Pokemon Voyage. You can turn a level 5 Pokemon into a level 1000 without having to trade for anything! 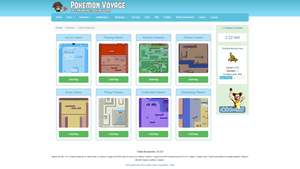 The map page of the RPG.

You can catch wild Pokemon on a variety of maps. These Pokemon aren't worth much but some of them prove to be good Training Pokemon. Also it's possible that a member might be interested in a lot of maps, perhaps a lot of one specific Pokemon. Most members who are interested in mass maps are collectors. To catch wild Pokemon click on "Pokemon" then "Catch Pokemon." You will be redirected to a page where you can pick a map to explore. To see the list of wild Pokemon available one each map click here. Protip: Try out the brand new Legendary Island ! Here you'll be able to spend money for the chance at catching Legendary Pokemon! 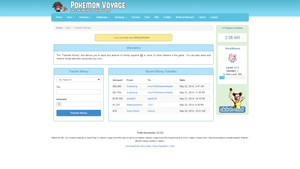 There are a few ways of obtaining money. You can earn money while Training on the RPG or you can trade it to and from other members for Pokemon or items. However you can also find contests involving money on the forums from time to time. Another way of getting money is by Selling Pokemon. You can use the money to buy other members Pokemon, buy Items from the 'Shady-Character' Giovanni on select maps, and to unlock certain promos and events on the Rpg. 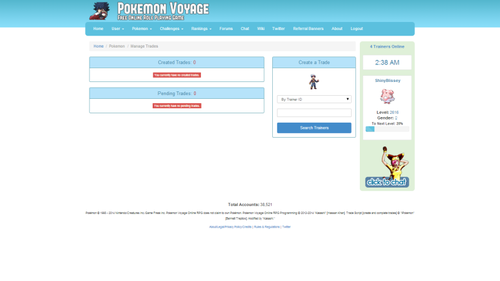 Trading is the largest and most popular part of the RPG, and is also the fastest way to get the Pokemon that you want. You can trade your Pokemon and/or money for the Pokemon and/or money of other players if you both agree to it. Trading accounts is NOT allowed. The easiest way to find people to trade with is to go the the Trading Section on the forums (Make sure you see Linking Your Account before posting), or by joining the PokemonVoyageDiscord.

Now when most people start out they are afraid to offer on different things available in the RPG. Don't be! You never know what people are going to say to offers. There are no set 'rates' on Pokemon Voyage so any trade can be done. That being said, Golden Pokemon, Legendary Pokemon, Ungendered Pokemon (those with a (?) gender), and certain other types are more liked than normal Pokemon. If you want to become a better Pokemon Trader, you should check out the Trading Guide!

It is usually hard for new members to get started with trading, because they don't have much to trade. However down at the forums you can try entering some Contests!

Long story short on trading, if you want to get any where here on Pokemon Voyage you need to trade. If you're trading for things you like, or if you're just trading for profit to gain enough for what you want on the RPG, the only real ways your going to be able to do that is by making an account on the Forums so you can talk with the community's other members.

So what are you waiting for? Get down to the forums and start trading!

In the Pokemon Voyage RPG, a player can earn achievements by completing different tasks while logged onto the RPG. Some of these tasks can be as small as defeating certain Gym Leaders, and as large as obtained 50 GoldenPokemon. For each achievement you complete on your account you obtain 10 Achievement Coins which can be traded in at the Achievement Shop for Pokemon rewards.

The Eight Badges of the Kanto Region

Just as in the handheld Pokemon games, Pokemon Voyage has those wily Kanto, Johto, Hoenn, Sinnoh, Unova, and Kalos region Gym Leaders, all waiting in anxious anticipation of your challenge. Each Gym Leader has a maximum level that any Pokemon in your party can be, and if a Pokemon is over that level you will not be able to use it versus them. Beat them all and you earn a cool Pokemon. If you need to learn more, visit our page on Pokemon Gyms

All Pokemon can be obtained via trading with other members. Here are some other ways to get Pokemon:

Aqua and Magma Pokemon are a Pokemon Voyage exclusive typing. Not much is known about them, but so far they seem to be very similar to Shiny and Dark Pokemon. They are primarily obtained through the Achievement Shop, mini-games, events, and Promos.

Ungendered Pokemon are those weird (?) Pokemon. They are unique Pokemon due to their gender. Most (?) Pokemon are very rare. They were released during the Alpha and Beta stages of Pokemon Voyage, however they are now released through contests, events, promos, and can be MiniGame Prizes. ShinyHoundoom is an example of one of the many (?) Pokemon available in game. Ungendered Pokemon do not have their own specific sprites, the only thing different about them is their gender. They can be normal, shiny, dark, aqua, magma, or golden.

Legendary Pokemon can be obtained from events, Pokemon Gyms, the Elite Four, the Champions Tournament, Rival Battle, and the Legendary Island.

Do you like Rayquaza, Moltres, Zapdos, Articuno, Mewtwo, Mew, Ho-Oh, Lugia, Latios, Latias, Darkrai, or Deoxys? Whew... that's a lot of legends! Chances are you like at least one of those Pokemon and probably would like one on Pokemon Voyage. You can obtain any, and all of these, by defeating your Pokemon Voyage rival: Barry! If you want to learn more about Barry go ahead and visit Rival Battle. Battling Barry is a good way to create "wealth" on the RPG while not having much to start with. If you need help, feel free to use this guide Rival Battle Guide, or on our wiki Rival Battle Guide.

Do you still have questions and/or concerns after reading this guide? You are STRONGLY encouraged to scan through the rest of the Wiki first. It is a GREAT tool for new members, and has a lot of information. Don't forget to make good use of the search bar in the top right corner. Feel free to stop by the PokemonVoyageDiscord if you have any questions.

If you still have questions try the FAQ on the forums.

After checking both of those, if your question is STILL not answered, post in the Help Section. Other members, including staff members, will try to answer your question(s) as well as they can.

Remember: Have fun, follow the rules, and catch all the Pokemon! 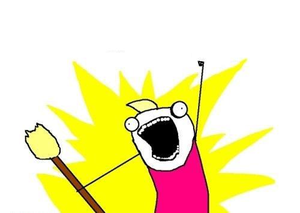 CATCH ALL THE POKEMON
Retrieved from "http://wiki.pokemonvoyage.com/index.php?title=A_Beginner%27s_Guide_To_Pokemon_Voyage&oldid=12629"